What are file systems?

A file system is a method of organizing and retrieving files from a disk or hard drive. Computers use different types of file systems to store and organize data on media such as hard disks, SD cards, USB sticks, CDs and DVDs. Without the file system, all data would be disorganized and could not be found or retrieved by the users.

There are three file formats most commonly used by Windows: FAT32, exFAT and NTFS. They have their own way of organizing data, some are faster and offer better compatibility, others have a higher level of security.

The transition to these file systems was as follows:

NTFS refers to the new technology file system first introduced in 1993 as part of Windows NT 3.1. It is the most secure and reliable file system used by the Windows operating system to efficiently store, organize and locate files on the hard drive. When Windows is installed, the hard disk of the system is formatted with the NTFS file system. NTFS has other advanced features, including support, file permissions for security (which can help you quickly fix errors in the event of a computer crash), backups, encryption, disk quota limits, and so on.

By default, Mac OS X can only read but not write NTFS drives. Some Linux distributions contain NTFS write support, but some are read-only.

The most widely used file system in Windows today is NTFS.

It does not apply to MS-DOS, Windows 95 and Windows 98 systems, and NTFS is slow on a small disk.

FAT32 stands for File Allocation Table, an updated version of FAT 16, designed to overcome the limitations of FAT16 (a maximum volume size of 2 GB is supported) and to support larger drives. This is the file system used in the old version of Windows 95 before Windows XP. However, the file size is limited to 4 GB, which can be a problem with the current Blu Ray rips and 4K video files. However, if you only want to share small files between computers, this system is very useful.

Professional advice : If the maximum file size is less than 4 GB, FAT32 is the best file system for your memory card.

It does not offer the logging functionality and other advanced features built into the NTFS file system and is not as compatible as FAT32.

Below is an overview of the main differences between FAT32, exFAT and the NTFS file system. 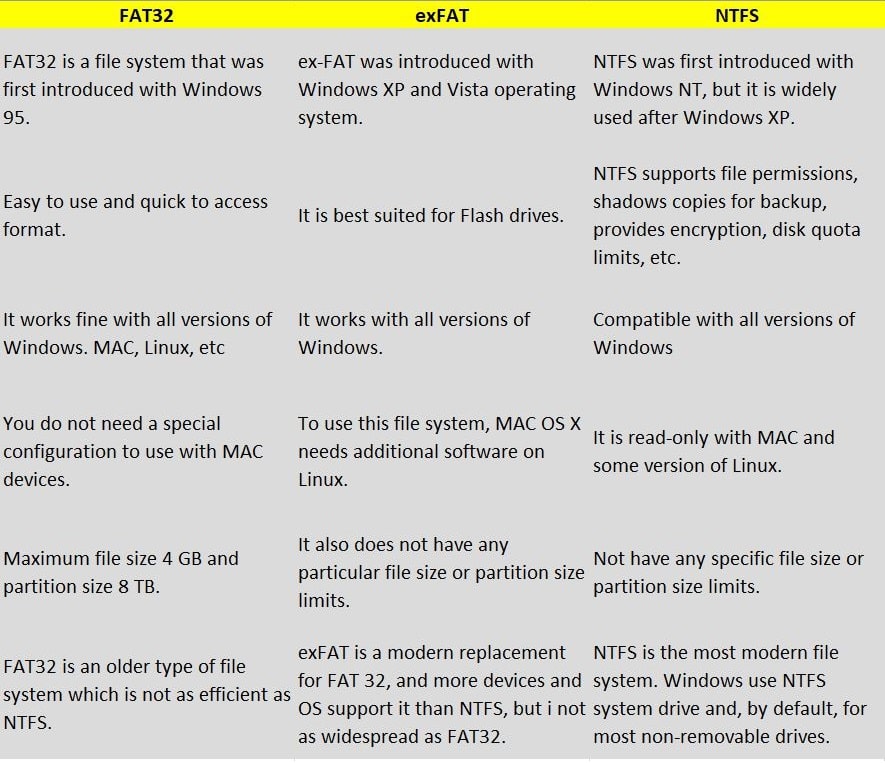 Here is a video tutorial that explains NTFS, FAT32, exFAT, what the differences are between file systems and what the file system actually does.